Stop me if you’ve heard this before: mug jokes!

Roll up, roll up, get yer mug jokes right here… [/caption]Keeping on with our World Cup Tournament 2014 England cup theme *cough cough* and following on from our last blog about our Chris Smalling England mugs (you know the ones with our good friend Barack Obama appearing for the England team in the World Cup this summer?) we though you would appreciate a little humour.

So sit back, grab yourself a mug of tea and a hobnob or two and have a titter at our England cup and mug jokes. 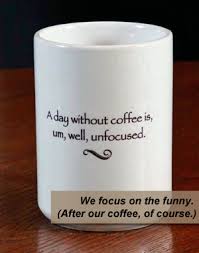 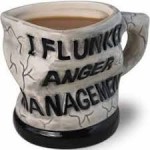 1. A soldier keeps a mug upside down and tells the sergeant: “I can’t drink from this mug. It has no opening”. The sergeant examines the mug and says: “You’re right. And besides that, it has no bottom either”.

2. A man walks into a real ale pub with his own German beer mug. “A pint of ‘John Smiths’ bitter please,” he says. “Fill his stein,” the barman tells the barmaid. 4. My grandmother has always been such an inspiration to me. She has crippling arthritis making it impossible to turn her neck. She is even too weak to lift a mug of tea from a table, she has cataracts in both eyes preventing her from seeing her hand in front of her face, she suffers from incontinence and is prescribed treatment which induces nausea and dizziness. Through all that she turns to me this morning and said ‘Always look on the bright side son …. At least I can still drive.’ 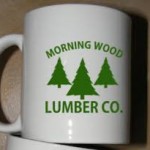 8. My mate’s had one of his massive ears pinned back, but left the other one sticking out. He looks like a proper mug.

9. I tried to buy my dad a World’s Greatest Dad mug for his birthday today. The cashier told me that I was too late. Somebody else’s dad already is.

10. Q: How long does it take to ship tea from China by slow boat? A: Oolong Time! 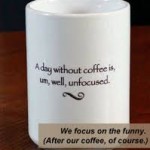 11. I’ve just been round to my next door neighbour’s house to borrow a cup of sugar. Unfortunately because I only have one mug I still can’t have a blooming brew!

12. The guy in PC World asked me how much storage space I had on my laptop. “I manage to balance a couple of plates and a mug of tea on it” I said.

14. Apparently when you spend £5 on a coffee in Costa you get a free mug. Just stop by the nearest mirror on your way out to see it. 16. I tried drinking from a Liverpool FC mug yesterday, but it was impossible. It kept sliding down the table. 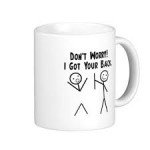 18. My wife poured coffee all over me at the breakfast table this morning. I don’t enjoy confrontation so I just ignored her. But then at work my secretary poured her piping hot tea on my head! Again, to avoid confrontation I ignored her. The last straw was when I went round to my mum’s place as she was ill, and she poured lemsip straight onto me. Honestly, women take me for a right mug.

19. Paddy is fitting a kitchen in a posh house when the woman asks him if he’d like something to drink. Paddy accepts and soon after the woman brings him a mug of coffee. “Excellent coffee, to be sure,” says Paddy. “Thank you,” says the woman. “My husband brought it back from Brazil.” “That’s great,” says Paddy, “and it’s still warm as well!”

20. I spent all day making a mug, but when I went to pick it up, half of it fell off! I didn’t handle it very well.

21. Q: Why did the teapot get in trouble? A: Because he was naughtea. 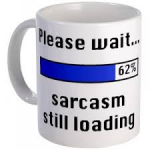 22. People want to know why BBC Radio DJ Huey Morgan (also of Fun Lovin Criminals) flipped out and smashed his mug on Never Mind the Buzzcocks. Maybe it’s because he’s a radio DJ who works for the BBC, and he’s probably not looking forward to getting arrested when he retires.

23. I saw a mug in a shop today that had ‘World’s Best Mum’ written on it. I acted really politely in front of it in the hope that it would adopt me.

24. A businessman finds his way into a transport cafe and has a big breakfast. Everything is great until he drains his mug of tea only to find, there in amongst the tea leaves, a dead fly. Angry, he calls over the waitress and demands, ‘Hey, look in the bottom of my mug – just what is the meaning of that?!’ She shrugged and said ‘God knows! I’m not a gypsy.’

26. An oldie but goodie. When an Insect Falls Into A Mug of Beer The….
Englishman: Throws his mug away and walks out
American: Takes the insect out and drinks the beer
Chinese: Eats the insect and throws the beer away
Pakistani: Sells the beer to the American and insect to the Chinese and gets a new mug of beer.
Indian: Accuses the Pakistani of throwing the insect into his beer, relates the issue to Kashmir, asks the Chinese for Military aid and takes a loan from the American to buy one more mug of beer! 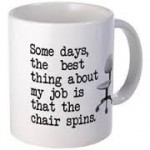 27. You know you’ve had too many mugs of coffee when:
You can ski uphill
You haven’t blinked since the last lunar eclipse
You get a speeding ticket even when you’re parked
You can grind your coffee beans in your mouth
You answer the door before people knock
You can take a picture of yourself from ten feet away without using the timer
You have to watch videos in fast-forward
You’re the employee of the month at the local coffeehouse and you don’t even work there any more

Join in the fun! Come and visit us on our Facebook page here or add a comment below with your favourite mug joke! 🙂

One Response to “Stop me if you’ve heard this before: mug jokes!”