I was watching The Apprentice last night when I was reminded that I had been meaning to write this article for a while. Does anyone else find The Apprentice really stressful? All that anger, angst and bitchiness, and lots of people running around like headless chickens without a clue of what to do or how to interact with each other or work as a team? Thank heavens they don’t want a job with me.

Anyway, I digress. I caught someone using management speak on the show last night and once again I was well and truly struck by just how awful this language is. A recent article in The Telegraph (02.05.13) suggested that this management jargon is used in two thirds of offices across the UK, and a quarter of all workers consider it a ‘pointless irritation’. Even more amusingly, an article in The Guardian (23.04.13) described it as the ‘strangled vocabulary of management speak’, something that is actually ‘unspeak’ and is designed to ‘deflect blame, complicate simple ideas, obscure problems and perpetuate power relations.’

I wonder how and why it has come about? It’s clearly a load of old hogwash, spoken by people on a power trip. The ‘Access to Plain English’ campaigners would agree. They describe management speak as overused jargon that can be a barrier to good business, because people new to business don’t understand what the words mean and may be uncertain or unforthcoming about doing business with people they don’t understand.

The thing I’ve found about management speak is that it is spoken by people who sit around in meetings all day and don’t actually do very much work. The focus on creativity (a phrase bandied around far too much these days) and ‘blue sky thinking’ for example, surely just means people are sat around doodling rather than doing anything productive. The people doing all the work and producing results? Well they are paid less and valued less, but they aren’t trying to reinvent the wheel!

I’ve put together a few of the old favourites. Which is yours?

Let’s touch base – instead of simply talking to each other.

To ‘action’ something – my pet hate. Using a noun as a verb. Just don’t do it!

End of play/ close of play – some people like their jobs, that’s fair enough. But it’s not a game is it? This is how to drill down!

Drill down – when you’re looking at something in detail. I’m sure this one was created by men who would prefer to work on an oil rig or something a little more heroic than fiddling with paperclips all day. 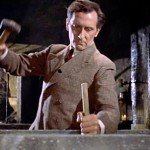 And this is a stake holder

Stakeholders – unless you’re a vampire killer, why would your clients, customers, students, colleagues, suppliers and the local cub scouts become stakeholders?

Revisit that – roughly translated means, ‘do it again you moron!’

Let’s talk offline – as in they want a face to face conversation rather than by email or Skype.

Challenges – remember the days when you used to have problems. Problems became a negative concept regardless of whether you wanted to solve them or not. Nowadays you are only allowed ‘challenges’ and ‘issues’. Funnily enough, you can still say you are problem solver, even though most organisations no longer have any.

Forward planning – totally ridiculous to use ‘forward’ and ‘planning’ in the same phrase. You don’t backward plan, do you?

Capturing – we ‘capture’ data, clients, trends, stakeholders, information etc. and so on. What do we do with it once we capture it? Lock it in a tower? Hold it for ransom? Sell it to Disney?

In the loop/out of the loop – a handy little phrase meaning you want to be informed about something.

Losing the will to live. Don’t try this at home.

Deliverables – like actionable (see above), this one actually makes me laugh out loud. Something that can be delivered – an outcome for example, is a ‘deliverable’. I think it’s amusing because it sounds like dirigible and didgeridoo, which themselves sound like words a toddler would make up. But also because both deliverable and actionable are objectionable nonsense.

And finally, that most fateful of phrases

Going forward – meaning ‘in the future’ or ‘from this point on’. It sounds finite and judgemental and you just know that when your manager says ‘going forward’, you won’t be discussing the ‘problem’ again.

The Apprentice wannabes are all skilled in the use of this language but as we have seen, most of them seem incapable of brushing their hair, let alone becoming entrepreneurs.

So, have I missed any of your favourite examples of management speak out? Let’s touch base. Which would you like to add? Keep me in the loop; drop me a line below and going forward I’ll 3000% make it an actionable that we’ll drill down your responses and revisit this topic. That’s a deliverable!

”I hear what You Say” ,, what they really mean is I don’t give a shit what YOU are saying WE are going to do it MY way ”

A lot of the above annoy me, but – I am happy with over 100% If you whole goal is 10 the goal = 100% If you get 11 you have scored 10% over your goal thus your score is a 110%. You have mark up and margin and VAT is and example. VAT exclusive – original figure is 100%. Add VAT @ 20% and although the total new figure is 100% it is representative of two figures added together. 100% and 20% thus making 120%. Really though to use this terminology it needs to be quantifiable data and people who use it on unmeasurable things really annoy me. My pet hate is the word mindful…. It really means I couldn’t give a toss.

“I need to have Facetime with”. WTF does that mean?

« Ten terrible mistakes you should avoid when selling on eBay!
Here comes the bride: selling for the wedding industry »