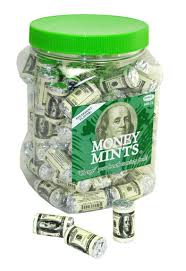 I have been reading the furore surrounding the American Julien Blanc with interest. Julien Blanc is possibly the world’s saddest man. He’s a self-styled ‘pick-up artist’ (a PUA) who preaches some fairly aggressive and obnoxious tactics to ‘help’ men get women into bed through manipulation and coercion. You wouldn’t think this was the twenty-first century at times, would you?

I bring this up here however, because this monster is making a mint from his business idea. He charges thousands of pounds to men who would pay to attend his seminars and learn his techniques. However dubious it is, Julien Blanc has hit upon a business model that appeals to a certain section of society and he’s making a living from it.

The rest of us may not be quite so keen to exploit our fellow human beings. We’re all in this life together after all, so here’s a look at some other crazy business ideas (or entrepreneurial genius – call it what you will) that have proved successful without hurting anyone else. 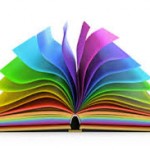 That’s a description of early Amazon believe it or not. It was a bookstore online. Why would that work? Jeff Bezos, a financial analyst working in New York sat up and took notice of a statistic that said that online sales were increasing at a rate of 2,300% per year. He decided he’d like a piece of that pie and knowing that books were cheap and easy to ship he started his company up. Initially customers found the website difficult to navigate and declared it boring but improvements were made and the company has billions of customers worldwide. 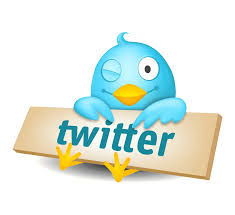 He can afford to look smug!

Odeo are a podcasting company that in 2006 ran “a daylong brainstorming session” among its board of directors. It was an undergraduate student at New York University names Jack Dorsey who came up with the idea of people using an SMS system to communicate with others in the web. That messaging system became less of a communication system between people and more of a real-time newswire. What is it? Well if I tell you that the SMS messages are 140 characters in length then you’ll recognise the company as Twitter. 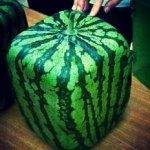 Yep! Possibly one of the simplest and greatest ideas ever. This is hugely popular in Japan where farmers have simply inserted baby melons into square cases and of course as they grow they take the shape of the case. Being square the melons are easier for shops to stack and transport around. 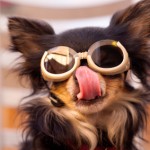 Celebrity culture has a lot to answer for where poor pooches are concerned. Accessories for dogs are huge business these days, but one woman moved dog accessories up a level when she created eyewear for dogs. Jill Doyle makes goggles for dogs. The goggles have some practical value as they have UV protection, and are particularly useful for visually impaired dogs, and the company makes over $5,000,000 per year.

You can pay to run away from this guy!

A company named ‘Run for your lives’ has cornered the market in weird entertainment in the USA. Run for your lives operates a five km obstacle course, and contestants pay $57-87 to be chased by zombies. Zombies pay $50+ to chase runners and everyone else can stand on the side-lines and laugh their socks off for a measly $22.

Have you ever fancied keeping chickens, but really you’re just not sure? Well that’s the genius of this idea. The outlay for a chicken coop and chickens and feed might be more than you’re willing to pay out unless you’re 100% sure. Well this crazy business idea really works. Rent-A-Chicken are a husband and wife team in the USA who drop off everything that you need in order to care for your own little brood of hens. It costs $250, and you get to see whether or not raising chickens is for you. A similar crazy business in Australia is called Rent-A-Chook.

We’ve all been there. We were up all night partying and when we struggle down in the morning, the house is a tip and we feel too ill to tidy it up. You can’t face it. Who you gonna call? Hangover Helpers of course! Hangover Helpers started as two college guys in Boulder in the US who had the crazy business idea of helping clients crawl back into the land of the living as gently as possible. They simply guys show up at your house – bringing breakfast for you and then clean every room and attend to the recycling.

That’s service for you!

Another crazy business idea from the USA that is phenomenally successful is the ‘excused absence network.’ The founder of this company runs the business from a laptop. If you’re in need of a letter to miss work or school you just get in touch. You’re supplied with an authentic looking excuse letter – perhaps a doctor notes, jury summons, and so on. Amazingly the site gets 15,000 hits a month, and they charge a very reasonable $25 per excuse note.

You’ve probably heard of everything now … but in Australia, the pet loo is a crazy business idea that is fast becoming popular. The Pet Loo is a square of fake grass, which sits on top of a simple waste containment system that you place inside your home or apartment. It’s a little indoor garden for your pampered pooch. Your dog can visit the garden to attend to business.

And while you might think it’s taking the ****, it is a useful invention for people living in apartments or housing with no access to gardens, or for the elderly or disabled. It can also be installed in those small city backyards that have no grass. 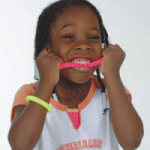 It’s a problem many new mothers have faced – babies are very keen to chew on your hair or your jewellery so one bright entrepreneur decided to do something about it. Their crazy business idea was to create chewy jewellery. It’s a range of jewellery that that children can safely use when they’re teething – but it looks good too. It’s a money making business idea that some celebrities have started endorsing. 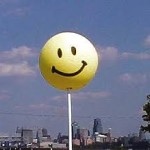 Whayey! Cheap and cheerful and worth a fortune!

If somebody told you that they had decided to sell people antenna balls to put on their car aerial, you would think that was a crazy business idea, wouldn’t you? Well, think on! It may sound pointless but the guy who invented antenna balls is now a millionaire.

Josh Opperman was the happiest guy on the planet until his fiancée left him after a three-month engagement. She was kind enough to give him the ring he’d slaved at work to afford, but when he took the ring back to the jewellers where he’d bought it he found that the jeweller would only give him $3,500 for a ring he had paid over $10,000 for!

So Josh had the crazy business idea to start the website ‘I Do, Now I Don’t’. It’s a website that allows people to sell their engagement rings (or in fact any other nice jewellery they might want to part with) and their return will be greater than taking it back to a jewellery store.

Turkeys and chickens only have one wishbone apiece and so when Ken Ahroni became frustrated that not everyone around the table could pull on a wishbone he came up with the idea of creating a company that made plastic wishbones. Yes it’s a crazy business idea and yet LuckyBreak now makes 30,000 wishbones a day, including custom-designed and personal wishbones, and has an annual turnover in excess of $2.5m per year. 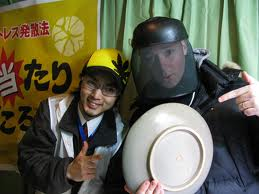 And finally, my favourite. If you’ve ever gotten so mad that you want to throw the crockery around at home you need The Smashing Place. This is a business in Tokyo, where you are allowed to go in, buy a plate or a cup and smash it as hard as you can against a concrete wall. You can swear, shout, stamp your feet or do anything you like. It helps the stress seep away and calmness is restored.

Some of these crazy business ideas are brilliant but remember that the key to building a successful business is that you are brave and passionate, that you’re willing to work hard and that you’re determined to make your business work.

Have you come across a business idea that you though was crazy and yet it has really worked? Have you got your own crazy business idea? Leave us a message below or come and share on Facebook. You’ll find us right here. 🙂

« eCommerce and Order Management Systems: Tips of the trade care of Charlie McBroom
We are the champions, my friends!* »